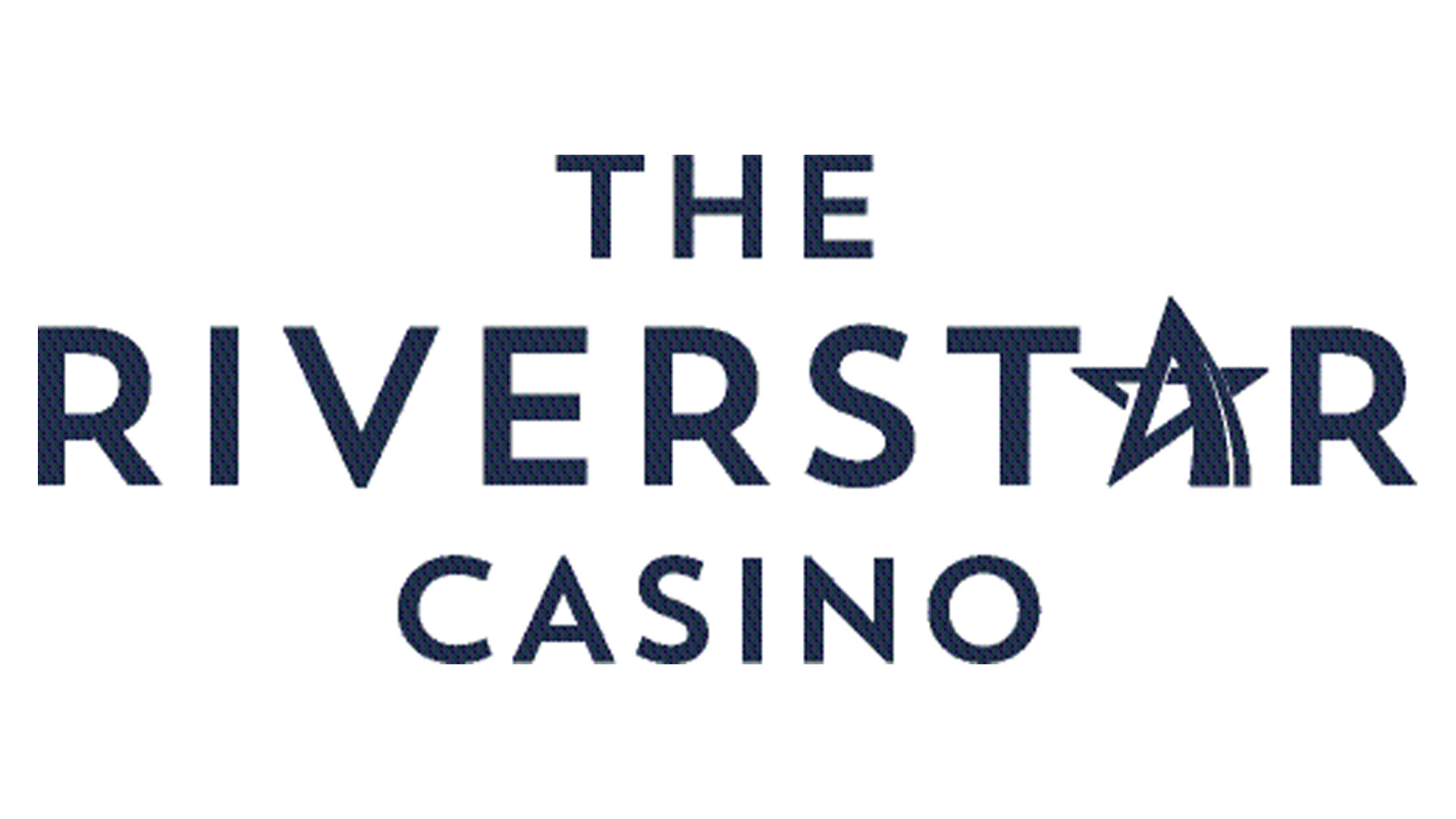 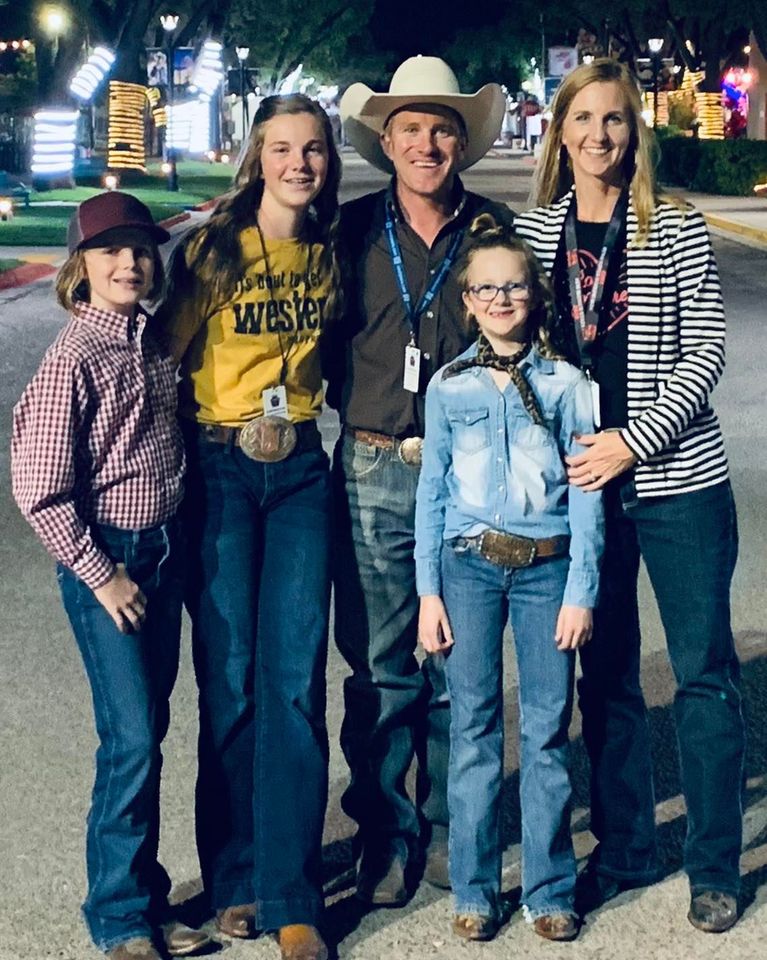 Hi Lo ProRodeo boasts over 300 head of bucking bulls and horses. With a string of mature, up-and-comers and breeding stock dotting pastures in Arkansas, Kansas, Oklahoma and Texas, Hi Lo boasts some of the top buckers in the professional rodeo industry today. Hi Lo’s headquarters are on 500 acres in southwest Arkansas, and they’re proud to serve the southern region of the U.S.

In recent years, Hi Lo ProRodeo proved to be the industry leader at developing superstars. At the 2021 National Finals Rodeo, ten head of Hi Lo bucking horses came out of the iconic yellow chutes ridden by the biggest names in rodeo at the Thomas and Mack. And that is why “The Buck Starts Here!” 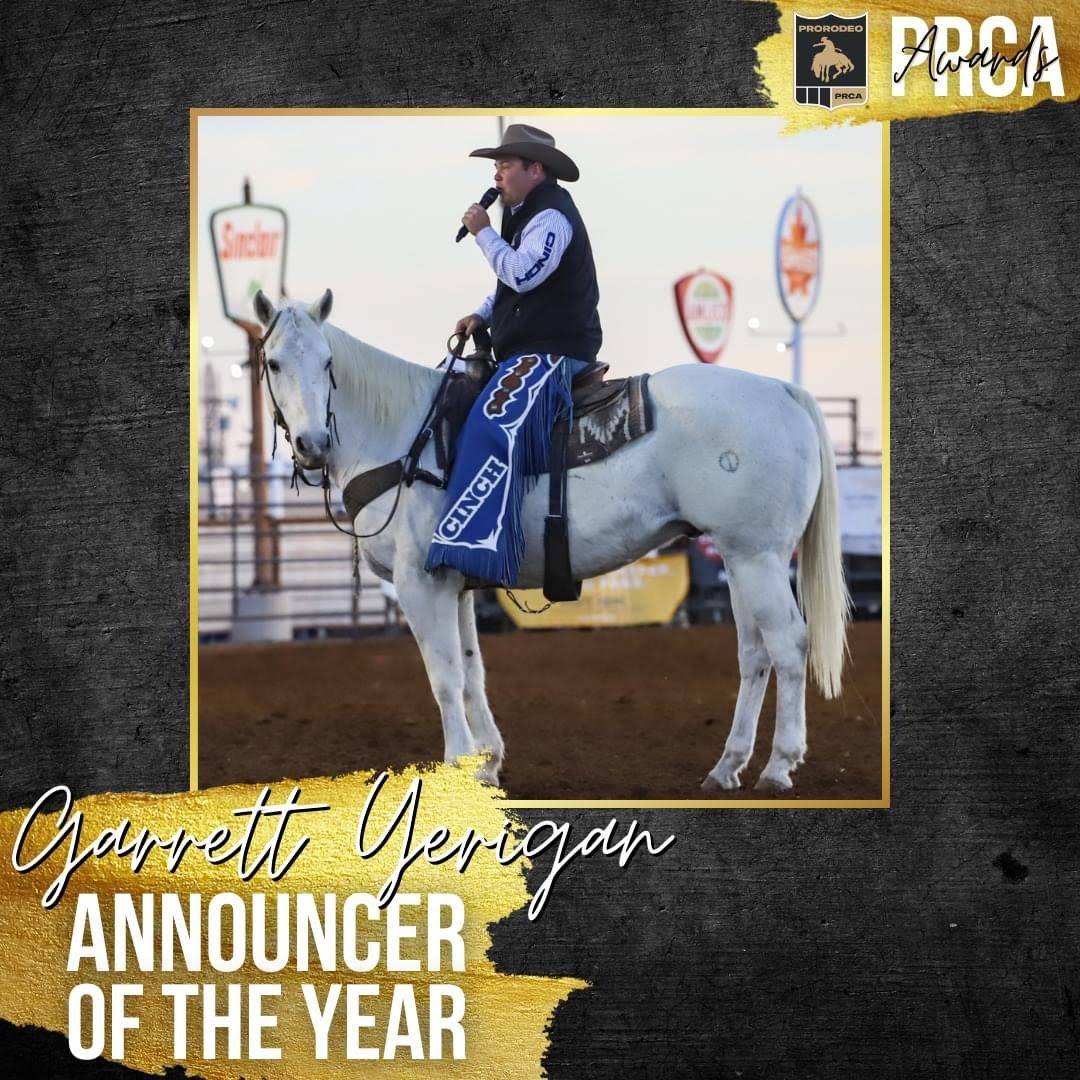 At 27 years young, Garrett has been around rodeo all his life as his dad, Dale, is a former rodeo competitor and mom, Kathy, still competes in Barrel Racing. Kathy is a former International Finals Rodeo qualifier in the Barrel Racing and Dale is an 11-time IPRA World Champion in the Steer Wrestling and is currently the General Manager of the International Professional Rodeo Association. Garrett is a 2013 graduate of Pryor High School in Pryor, Oklahoma.

Garrett has been a very active member in the FFA serving as the Chapter Sentinel and later Vice-President. He was blessed enough to be the 2012 Oklahoma FFA Proficiency Winner in Agricultural Communications and went on to be the National Winner that same year. In 2013, he finished in the Top 3 for Northeast District Star in Agribusiness, received his State FFA Degree, and was the State and National Outdoor Recreation Proficiency Winner. In 2016 Garrett finishes his FFA career by being a National Finalist for National Star in Agribusiness and receiving his American FFA Degree.

In 2015, Garrett joined the team of only 5 PBR in-house announcers and could be heard at some of the Velocity Tour events and at select PBR Australia Cup Series events. In 2015 and 2016 he was selected to work the ABBI World Finals held in conjunction with the PBR World Finals in Las Vegas. In 2016, Garrett voiced the inaugural run of the PBR Monster Energy Tour in Canada.

Follow Garrett's adventures around the world on his social media sites: 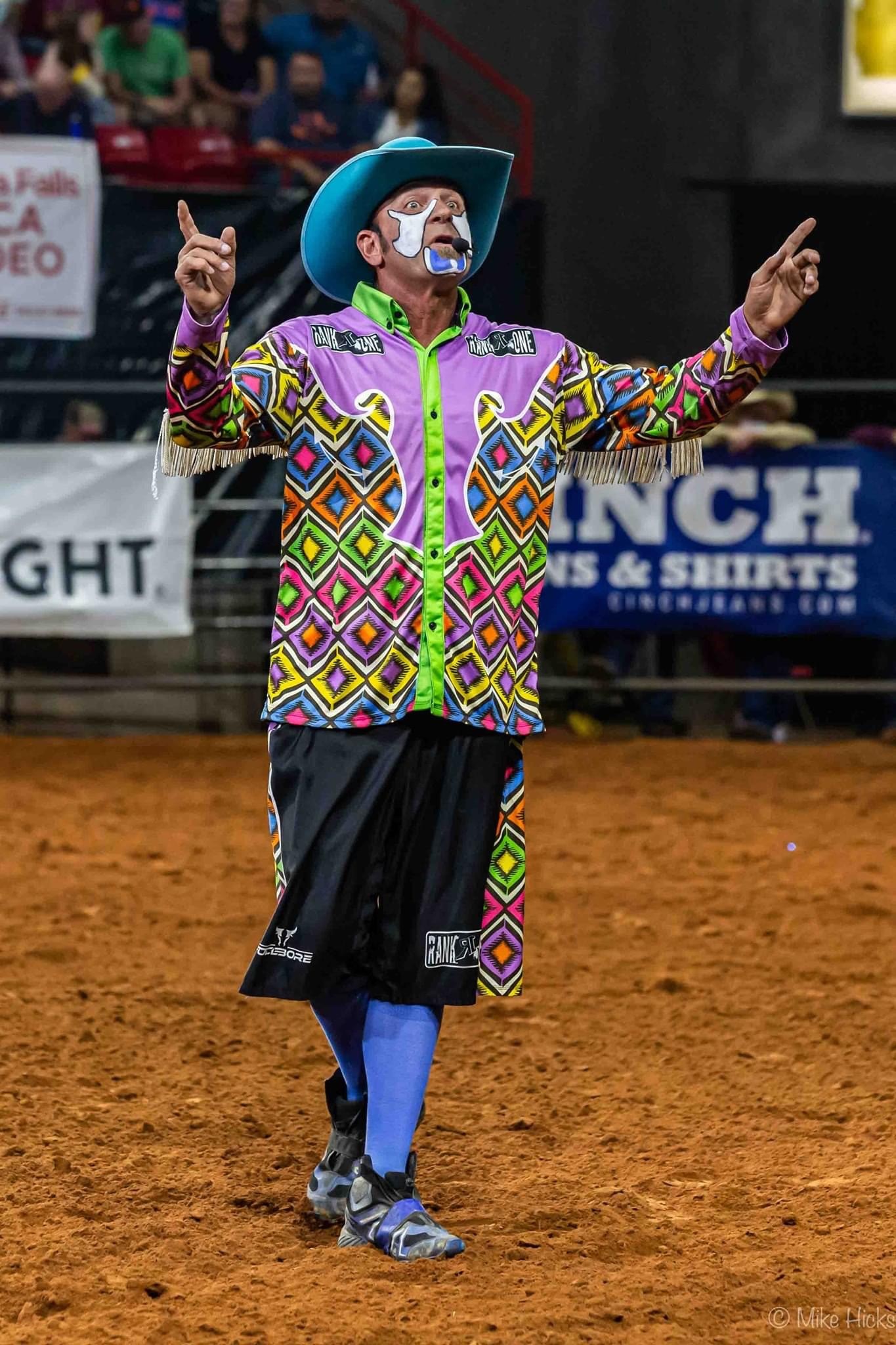 I’ve always dreamed of being a rodeo clown. I grew up riding bulls, then started bullfighting , but it wasn’t until I grabbed a mic that I realized I found my true calling. I absolutely love to make people laugh and put on a family friendly show, jam packed with fresh non-stop walk and talk comedy along with big original acts such as, WILDMANIA (monster truck act), The PERV (tank act), baby grand piano, firetruck, and chic-o-matic. My show will leave you talking for weeks after the rodeo is over and wanting to come back for more. 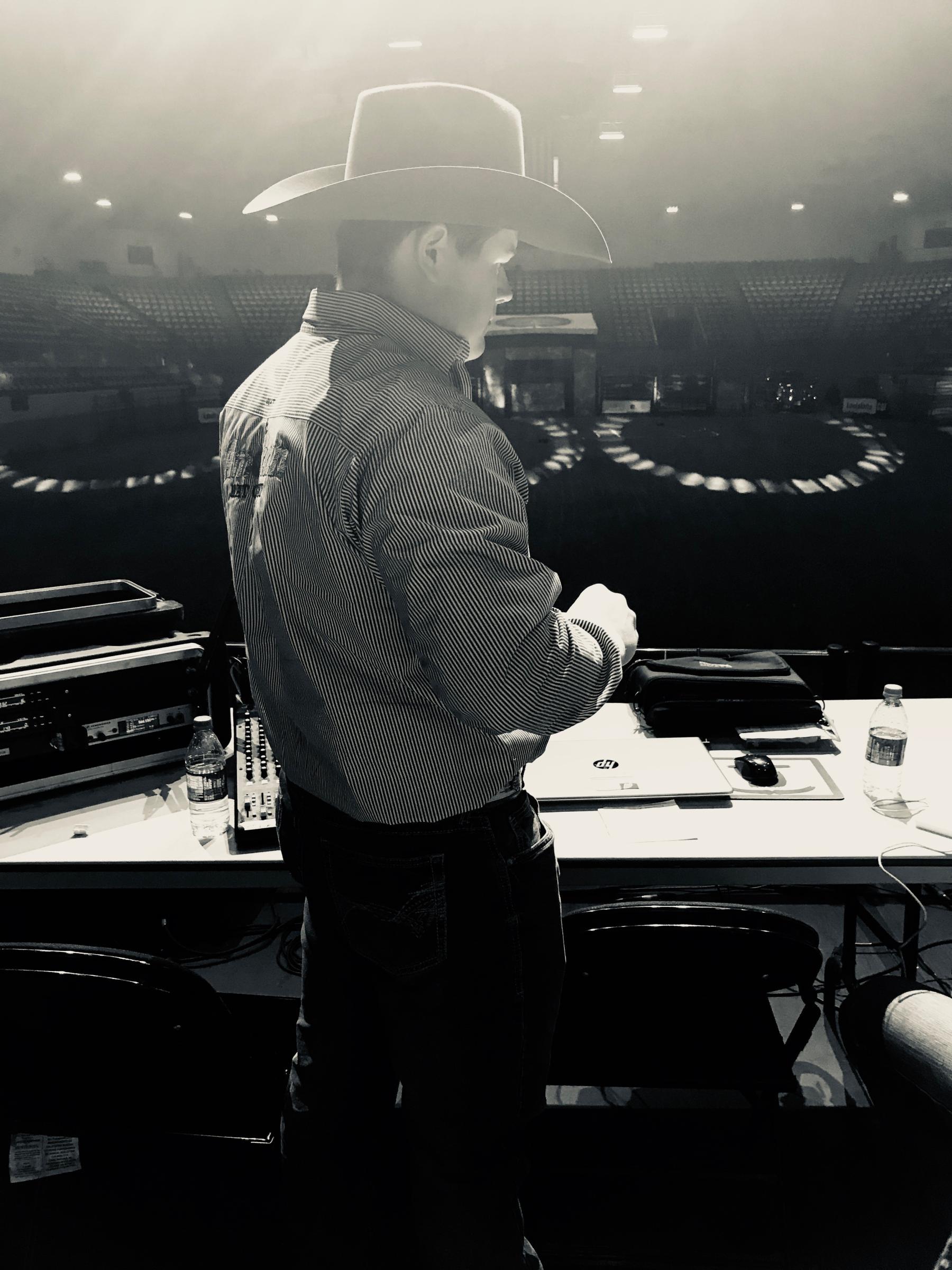 THE MAN BEHIND THE MIXER

Since I was little kid, rodeo has always played a huge role in my life. My grandpa as well as my dad both grew up riding saddle bronc horses, chasing every cowboys dream, day in and day out. I had no choice to grow up being involved in every aspect the rodeo world had to offer, but it wasn’t hard falling in love with it. When I first had my start I wanted to follow suit and try riding bulls and broncs, and while I did that for a couple of years being somewhat successful, I discovered a completely different side of rodeo that many people don’t recognize. I’ve never met a stranger in my life and talking to others always came so naturally to me, so I picked up a microphone one day and said “why not!” Getting to go to rodeos and bull ridings knowing for certain I got a check at the end of the night was much more logical and intriguing to me than the unknown being a contestant. I became more successful than I ever thought, and grew my name tremendously within a year with the help of good friends, and for that I’m extremely grateful for. I always like trying new things and bettering myself in any way I can, so this past year I decided to hang up the microphone and dive head first into sound production. It instantly clicked with me unlike anything I did before, and everyday I find myself more and more passionate about what I get the opportunity to do. Since choosing this path I have bought an entire concert series sound system. I never want to be someone who is comfortable and content with being mediocre, and I am consistently looking for anything that would help improve my business in every way. No matter how big or small the venue or organization is, I personally make a promise to myself that I will give 110% everywhere I go, every single time. I give all the credit to our amazing God and my wonderful wife and beautiful kids who support me every weekend, while I’m getting to travel around the country living out my dream. 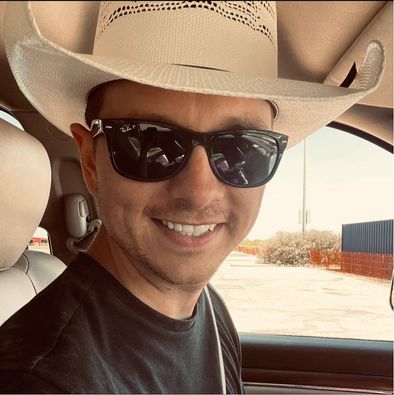